It is standard procedure for U.S. Navy ships to go to sea prior to forecasted heavy weather, such as an approaching hurricane or major storm. Some ships, such as ships under repair, ships under construction, harbor craft and other vessels may not be able to go to sea. These ships must be securely moored during heavy weather to piers, wharves or Fleet Moorings to ensure safety of the ships and surrounding structures and to prevent loss of life or damage to property. The Department of the Navy has been going through the process of modifying many of its facilities and moorings for heavy weather use. With ships getting larger there is a need for bollards to increase their tonnage as well. Recently, Marine Structures provided several American Made single bitt 265 ton bollards to the Naval Station in Mayport. These massive bollards were four foot tall and four foot wide requiring 2 ¾ inch bolts that were 54” long anchored with concrete 150 feet below the surface of the wharf. 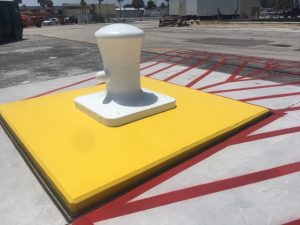 Heavy weather moorings are subject to dynamic wind loads and thus must be able to withstand abnormal forces where wind speeds greater than 50 knots are expected in the local area. Most sailors spend training time pulling lines while on active duty to learn the basic skills needed in the Navy. Now, the U.S. Navy is conducting training exercises to work with the larger nylon lines used to secure these massive ships during storms. 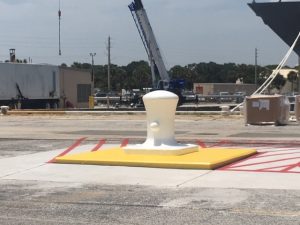 As ships get bigger the need for larger bollards increases too. Marine Structures manufactures bollards up to 300 metric tons. We provide quality, American made, marine bollards, cleats and fenders to projects both in the United States and all around the globe. To get a quote for your next project, reach out today.