Situated in Kings Point, New York on Long Island is a service academy like none other. The United States Merchant Marine Academy is a federal service academy operated under the Department of Transportation rather than the Department of Defense like other service academies. According to its website, the USMMA “educates and graduates leaders who are inspired to serve the national security, marine transportation and economic needs of the United States as Merchant Marine Officers and commissioned officers in the Armed Forces.” 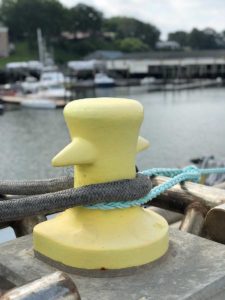 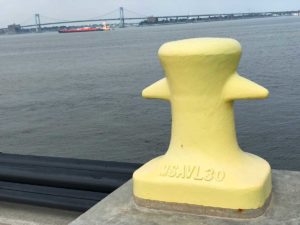 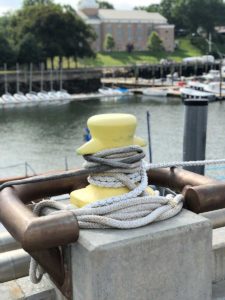 In 2013, the USMMA received an update to Mallory Pier located on its waterfront where future merchant mariners and military officers are trained. With portions of the original timber pier dating back to the 1940s, the pier needed modernization. The beautiful waterfront overlooks the New York City Skyline and has been training tomorrow’s maritime leaders for over 75 years. For over 50 years, their sailing, power and crew squadrons use their waterfront docks daily to train and mature both personally and professionally. It was time to upgrade the bollards and cleats at this prestigious academy.

The new pier was commissioned as a capital improvement project through the Maritime Administration (MARAD) under the U.S. Department of Transportation. The pier was replaced with a new concrete pier. Marine Structures was honored to provide 20 AVL .030.1 single bitt bollards and nine 24” cleats to their waterfront dockage during 2013. Our team worked alongside of the general contractor and engineers to ensure that our products met the specifications. Ensuring our single bitt mooring bollards were delivered on time without issue made us feel like we were living out the academy’s motto, “Acta Non Verba” – deeds not words.

We look forward to seeing their waterfront and midshipmen continue to make the Kings Point waterfront program one of the most decorated and respected programs in the United States with our products helping along the way.

Contact Marine Structures for your next maritime project and allow us to show you how affordable our mooring bollards, cleats and extruded fenders can be! You’ll be surprised at not just our prices but our excellent service.