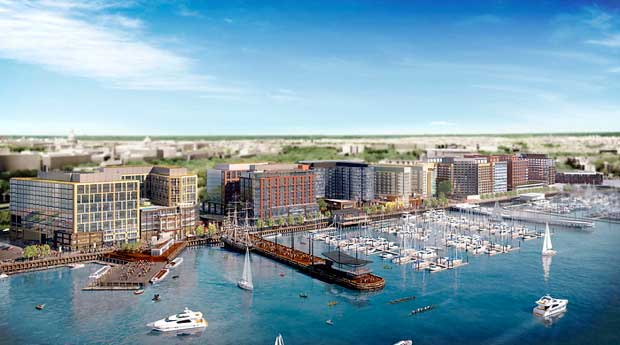 The Wharf in Washington, D.C. entered its second phase of development in early 2019 and Marine Structures was honored to be a part of this $2 billion project described as the largest private development in the city. The Wharf, a mile-long development along the Potomac River in Washington, DC, has already added hundreds of new residences, shops, restaurants and a huge new concert venue. The mixed-use project on the southwest waterfront in Washington, D.C. was designed to be pedestrian-oriented and water-oriented to encourage more activity downtown.

Marine Structures was contracted to provide both 65 ton, single bitt bollards and 30 inch cleats to the pier and the wharf, with phase one ending in 2017. Phase two is expected to be completed in 2022 finishing the entire project at 3.5 million feet of new development being added to the district.

“We were honored to be a part of such a historic project as the Wharf is being hailed as the biggest development in the Washington, D.C. area,” said Andy Pigott, owner of Marine Structures. He continued, “These bollards and cleats provide stable, safe and secure mooring for all those visiting The Wharf by sea vessels.”

The completed development will add 1.25 million square feet of mixed-use building space, including 625,000 square feed of office space, 255 apartments, 131 hotel rooms, 95 condominiums, a 1.5-acre park and two underground garages with more than 1,000 parking spaces. The completed Washington, D.C. Wharf will also include a new marina and 109,000 square feet of shops and restaurants. The benefits to the city are immense with new jobs and affordable housing options being provided according to the Office of the Deputy Mayor for Planning and Economic Development.

Marine Structures provides mooring bollards to marine related projects in the United States and worldwide. Our maritime products are located in some of the world’s finest ports and waterfronts. When your private development needs experienced experts to provide quality bollards at an affordable price, Marine Structures stands ready to serve.