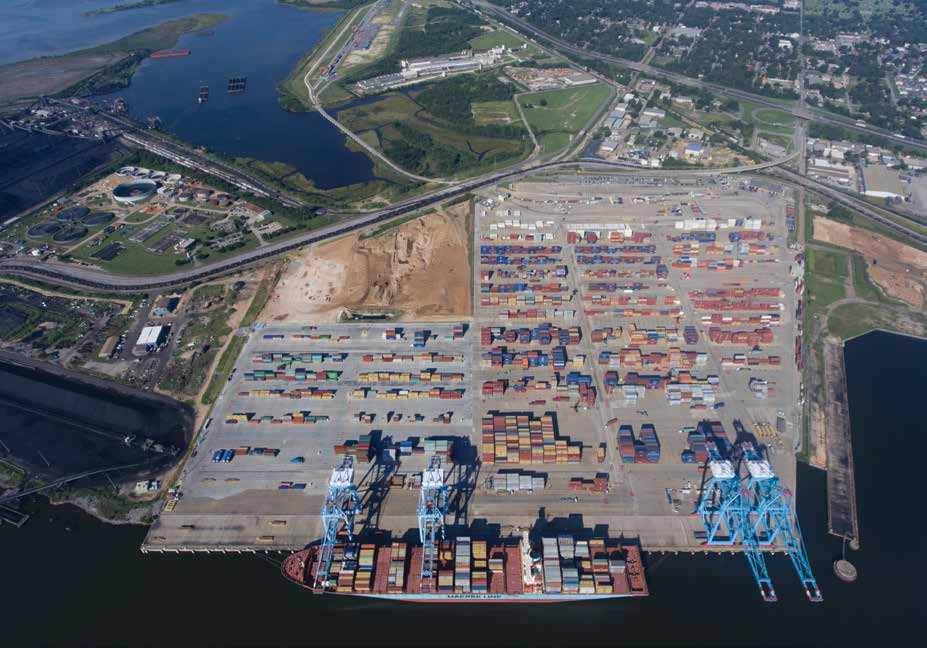 The Alabama State Port Authority (ASPA) and APM Terminals Mobile recently completed a $49.5 million expansion of the container facility at the Port of Mobile and Marine Structures was honored to be a part of it. Marine Structures provided marine bollards for the “phase 3” expansion that included a dock extension and 20 additional acres of improved yard to maintain capacity and offer new opportunities for business. It’s part of a long-term plan to grow the terminal’s annual capacity. Marine Structures provided several 225 ton and 90 ton single bit bollards.

The expansion was fast tracked due to the opening of a Wal-Mart import distribution center near it. Mobile is the second port call after Houston for the three, weekly, Asian container services that operate at Gulf ports via the Panama Canal. In 2017, the Alabama port surpassed New Orleans as the Gulf’s second-busiest container port in laden import containers. Wal-Mart’s 2.6 million square foot import distribution center, that opened in 2018, aided in the continued volume growth and possible additional services or larger vessels on existing services. CMA CGM replaced the Panamax vessels on its PEX-3 Asia service to the Gulf with 6,000 TEU ships.

“The container terminal expansion continues to be a huge asset and tool for our economic development efforts, especially with distribution and logistics projects. With the phased expansions, we are able to continue to show the growth potential regarding containerized cargo in Mobile to major companies like Walmart and Amazon,” said David Rodgers, senior project manager for the Mobile Area Chamber.

The port has competitively positioned itself and established Mobile as an alternative gateway for U.S. trade offering both shippers and carriers with cost effective and customer service-oriented options. In fact, the intermodal yard’s primary user is the Canadian National Railway, which has been marketing Mobile and New Orleans as “third coast” gateways for container shipments to and from the middle of the United States.

Marine Structures provides mooring bollards, cleats and extruded fenders to engineers and marine contractors worldwide. Contact us today for a quote on your next project.